Headlines
Spain Air Crash Updates
More info about the Spanair flight JK5022 that crashed during take-off at Madrid’s Barajas airport yesterday afternoon, killing 153 of the 172 passengers. According to an official, the device called an air intake prob reported as overheating in the front of the plane under the cockpit was not to be blame for the crash. The device was turned off by the technicians after found defective, but is not on a list of equipment that has to be functional for a plane to take off. He told a news conference that turning off such a device in these circumstances is an accepted procedure. In the mean time, witnesses said they heard an explosion and saw smoke coming from the plane’s left engine as it attempted a take-off. The plane attempted the second take-off when it crashed. What is known about the plane model- MD-82, is that it belongs to MD-80 series that has been involved in at least 10 fatal crashes, with an overall loss of over 1,000 lives. A sister plane of the jet that crashed had to make an emergency landing six days ago after suffering suspected engine problems. The flight from Lanzarote to Madrid diverted to Gran Canaria after losing power in mid-air.

Tesla Roadster electric car launched today
Now that the fuel costs cut jobs and pushed airlines into bankruptcy there is light at the end of the tunnel. Or is it? Check this wonderful piece of news: British Tesla Roadster is on the road as of today!!! Yupee!!! This baby looks just like a normal sports car, has a top speed of 125mph and acceleration of 0-60 in 3.9 seconds. What’s so special? Two words: electric car. It takes three hours to charge up and has a range of 220 miles on each charge. So, if you are in the market to purchase an Aston Martin, Porsche or Ferrari, maybe you change your mind and join George Clooney, Matt Damon, Brad Pitt and Arnold Schwarzenegger on the waiting list for the green friendly machine.
Tesla Roadster 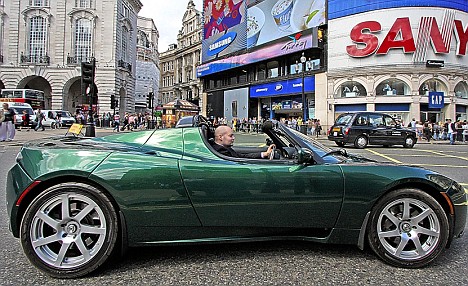 Woman, 61, gives birth to her own grandchild using eggs donated by her daughter
The surrogate mother used a fertilised egg donated by her daughter, who has no uterus. In my opinion it was a wonderful and generous gesture a mother can offer to her child. I have read comments from ignorants going from ‘why did she not adopt an orphan from Darfur instead of using her mom as a surrogate’ to an even more stupid ‘this is inbreeding’. It’s not inbreeding and no, I would not adopt from Darfur either. We leave Darfur, Malawi, and other exotic destinations to our beloved celebrities.

Celebrity Gossip:
– Jennifer Aniston is flying solo again. The last stunt with John Mayer was really bizarre and I tend to believe the tabloids that it was more a promo kind of thing.
– Matt Damon and wife had a new baby girl. The name: Gia Zavala (weird name)
– Alex O’Loughlin (Mick St.John from Moonlight) will be back on CBS next season. He signed a one-year deal with CBS to star in a new series, only that this time he won’t be playing a vampire. And Moonlight is still cancelled. Instead, HBO is going to give us a new vampire series, called ‘True Blood’. According to some old rumors, CBS considered that people did not really enjoy Moonlight as much as they enjoy watching a shirtless Mick St.John. Hence they cancelled the show but kept the actor. Fine with me.
– Michael Phelps has purchased a $1.69 million condo on the waterfront in Baltimore, Md. His new pad is 4,080 sq. ft. The complex has a rooftop terrace, a private screening room, a state of the art gym, a clubhouse with pool tables.
– If you watched the stupidest most recent Bachelorette, you know that that attention seeker dimwit named DeAnna Pappas rejected the eligible Jason Mesnick, the single father from Seattle. While most of the comments on various forums cried bloody murder and accused her of being a manipulative bitch (I totally agree) at the same time suggested him not to take the offer of appearing on The Bachelor series. Guess what??!! Apparently he has signed on to be the new Bachelor when the ABC series returns in January 2009. In your face DeAnna!!