It made the news around the world: new revelations courtesy of WikLeaks are going to shed light on secret correspondence between the U.S. State Department and various U.S. embassies around the world. Allegedly WikiLeaks is in possession of almost 3 million documents, including sensitive diplomatic cables sent to Washington from the American embassy in London.
The revelations may be include among others allegations of corruption against politicians in Russia, Afghanistan and other Central Asian nations, information on the U.K politics and documents showing that Turkey has helped Al Qaeda in Iraq.

The threat sent shivers on diplomatic world, and prompted the U.S. ambassador to Britain, Louis Susman to pay a visit to the U.K Prime Minister David Cameron to warn him about the content of the documents. Supposedly the sensitive documents contain details of secret discussions on the return of the Lockerbie bomber to Libya, among other information related to the U.K. politics.

On Wednesday, U.S. State Department’s Assistant Secretary Philip Crowley said that the possible release would “put national interests at risk.”
“We are prepared if this upcoming tranche of documents includes State Department cables. We are in touch with our posts around the world. They have begun the process of notifying governments that [the] release of documents is possible in the near future”

WikiLeaks twitters showing how the U.S. government, in anticipation of an imminent expose, is briefing its allies on what to expect. 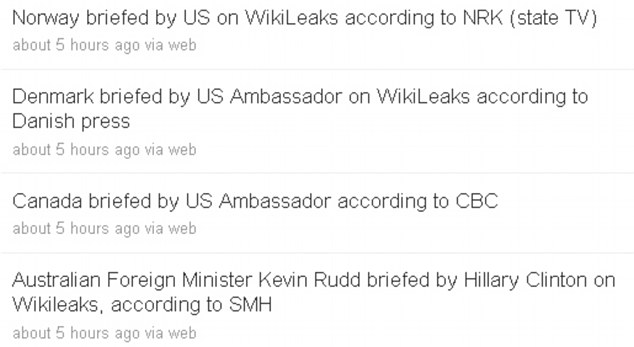 Newspapers around the world published articles warning about the WikiLeaks documents.
Russian Kommersant daily said that the documents contain the U.S. evaluation of the political situation in Russia and the unflattering characteristics of some Russian leaders.
According to Daily Mail “ There are fears of even the most apparently trivial secrets being hugely damaging. One British official said they feared that mutual American and British contempt for the French would emerge.‘Moaning about the French was practically a sport,’ he said”

The Israeli daily newspaper Haaretz, claimed that the U.S. embassy in Tel Aviv warned the country’s foreign ministry that some of the cables could concern U.S.-Israel relations.

The Washington Post reported that the files will contain allegations that the U.S. has supported the PKK, a Kurdish rebel organization that has been waging a separatist war against Turkey since 1984.

The U.S. says it has known for some time that WikiLeaks held the cables.
No one has been charged with passing them to the website, but suspicion focuses on Bradley Manning, an intelligence analyst arrested in Iraq in June and charged over an earlier leak.

As per Global Research “WikiLeaks’ founder, Australian activist Julian Assange, has no home address but he often pops up in Sweden and Iceland, where Internet anonymity is protected by laws. He is being hunted by Pentagon investigators and is suspected of releasing confidential U.S. State Department documents. 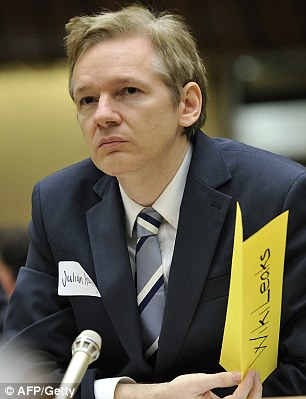 “The WikiLeaks website does not have a central office or any paid staff and its operations are run only by a small dedicated team and some 800 volunteers. Its servers are spread all over the world and do not keep logs, so governments cannot trace where the information is being sent and received from” (Global Research)

I suspect that the revelations are going to damage the international relationships to some extent. However, what I am more interested in is to read the truth about the E.U. and Middle East corruption or the deals made by the whole world with China and India or the annihilation (ethnic cleansing) of the Tibetans or the genocide in African countries. Instead of that we are going to read some embarrassing diplomatic gaffes.

To me it’s just sickening watching the drama unfold. Is it Oksana Grigorievna going to succeed in her evil and dirty attempts to extort money and destroy Mel Gibson’s career?
So far the judge seems to be unable to follow his own recommendation: holding her in contempt for ignoring the gag order. Is he biased? Most people believe that.
Is the tribe so powerful indeed as to control not only the Hollywood, but the court as well? The answers seem to be ‘Yes’.

I am a supporter of Mr. Gibson. He may be guilty of having a bad temper, of cheating on his wife, of being a disappointment to his children but I don’t believe it for a second that he is the abuser Grigorievna is trying to convince us he is. And I am 100% certain that she is not the victim of any domestic abuse.

Her supporters bring up the ‘tapes’ as a proof against Mel Gibson. Seriously? are they really that naive? Or do they really believe that most of us are such?
All right then, what about the tapes?
Various experts came out to prove that they have been tampered with.
Apparently clips have been spliced together and edited as to show an out of control Gibson vs a totally cool and under control Grigorievna, who allegedly at that time was afraid for her life and instead of calling 911, took her sweet time recording tapes.
Why the tapes have been admitted in court is beyond my understanding.

Following are two examples of different theories regarding the validity of the tapes and the pictures used by Grigorievna to proof domestic violence. Enjoy it!

The story as I can see it looks like this:
– O. Grigorievna understood that no baby, no money; so she conveniently found herself pregnant with Mel’s child. At that moment she hoped she would be given an official status, meaning getting a wedding ring. However, Mel had a different opinion and declined to marry her
– O.G. then started using the same tactics she used against Timothy Dalton: fabricating some incriminating ‘evidence’ to blackmail M.G.
– M.G. decided to fight it, hence the current big mess
– Contrary to what she is saying, she could not care less about her daughter’s future, as she is too busy feeling sorry for herself; I guess she knows that her reputation for being a cold blooded gold digger is going to keep any normal man as far away as possible from her from now on. Meaning that for once she is going to be forced to actually WORK to make a living. Not acceptable in her books. She thinks that she is the God’s gift to man and accordingly, she should be looked after and spoiled. She should be more concerned about not ending up in jail for extortion. Hence her doing the talk circuit.

Note: Larry King is an old geezer who does not have the moral compass to tell us who is right and who is wrong. Go home LK! time to retire and leave us alone! Her presence on your show was a disgrace.

In conclusion I reiterate that I am truly sorry for Mel Gibson. He pissed off the tribe and now he pays the consequences; Grigorievna, Larry King, are just tools in their hands. I respect him for fighting as hard as he does. He is a brave heart.

We have just started looking for a good deal to Mayan Riviera when the news hit the net.

As per Associated Press “An explosion believed to have been caused by an accumulation of natural gas killed six people and injured 15 Sunday at a resort hotel on Mexico’s Caribbean coast, authorities said.

Initial reports indicate that three Canadian tourists may be among those who lost their lives in the blast, said Quintana Roo state Attorney General Francisco Alor.

The explosion happened in the lobby of the 676-room Grand Riviera Princess hotel in Playa del Carmen, which is located in Quintana Roo”

According to official reports, the investigations were focusing on the possibility that naturally occurring gas from a nearby swamp had built up under the hotel and somehow ignited.

The world became such a dangerous place lately, that we don’t feel comfortable anymore leaving our house. You read about tourists being hijacked and killed in South Africa, kidnapped in various places, mugged and raped or killed in explosions and it’s no wonder you start considering that a vacation in your backyard sounds not only economical, but safe also.
I guess we are not going to find out if the explosion at Grand Riviera Princess happened indeed because of natural gas natural ignition or it was an act of terrorism.

We did not feel safe to go to Puerto Vallarta because of Mexican ‘pirates’ and started considering the Mayan Riviera as a safe alternative. Now we don’t know what to think anymore.