Just when I told myself that nothing would surprise me anymore with regards to insane amounts of money spent on modern art, here comes Damien Hirst’s record of $198 millions made over 2 days auctions held by Sotheby’s. And that happened at the same time when the Lehman Brothers Holdings collapsed. I guess some people, like the billionaires made rich by the dreadful hedge funds, found a rapid niche to invest money out of the sinking ship.

Some time ago I wrote a post about Lucian Freud’s big sale of $33.6 million for the painting ‘Benefits Supervisor Sleeping’. More like expressing my stupefaction that somebody would fetch so much money for a painting that was not even very appealing.
But I have to give him credit for the many hours spent working on his paintings. Not the same thing is to be said about Damien Hirst, who is using an army of assistants to come up with something identified as ‘art’.

The piece of work that really amazed me- really worth $19.7 million??- was The Golden Calf. 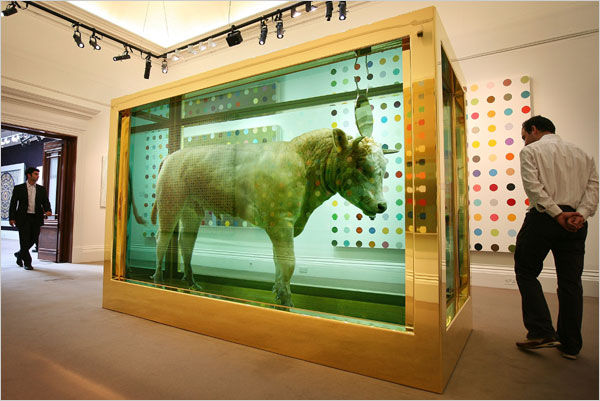 In case you don’t understand what’s in there I tell you: It’s a real calf in a tank of formaldehyde, with 18-carat gold hoofs and horns and a golden disc on his head.
Grotesque, to say the least. I can only presume that whoever wasted $19.7 million on this thing did it just to have volatile paper money backed by the more secure gold. Really, who the heck is going to keep a formaldehyde tank in the house and stare at it thinking ‘wow, it brings me such piece of mind’. The whole stupid thing weights in 600 kg.

If you want to see a really nice piece of art involving a Golden Calf, go to the British National Gallery and look for ‘The Adoration of the Golden Calf’ by Nicolas Poussin. 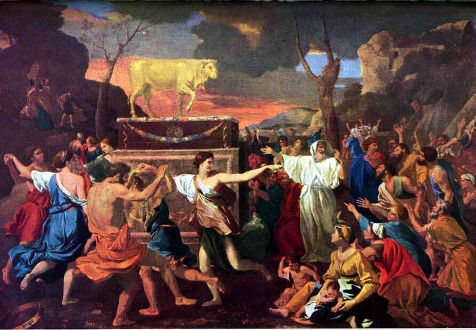 It’s not the first time Hirst goes head to head with Picasso’s work. Last year Hirst’s work “For the Love of God” was said to have been sold to an investment group for $100. It’s a skull of 35-year-old 18th century European man, cast in platinum and covered with 8,601 diamonds.
For the Love of God 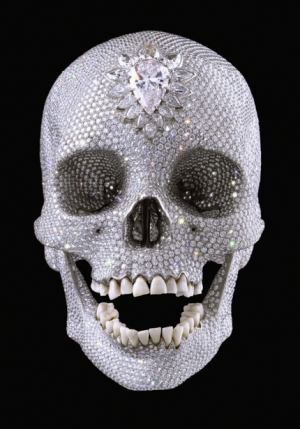 But Picasso’s “Garçon à la pipe” was sold by Sotheby’s New York in May 2004, to an anonymous buyer for $104.1 million. The painting broke the record held by Vincent van Gogh ($85 million)and it was the first time that the $100 million barrier was broken. Speculations ran that the ‘anonymous’ buyer could be Guido Barilla, the Italian pasta magnate. 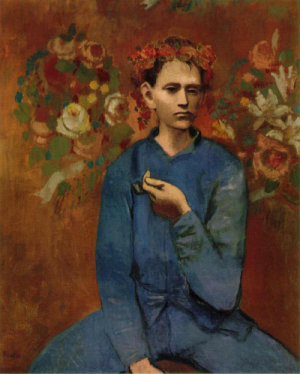 Another Picasso work, the painting ‘Dora Maar at Chat’, was sold by Sotheby’s in 2007 for $95.2 million to a mystery Russian buyer. The buyer’s identity has been revealed inside the house on a strictly need-to-know basis. Of course such a secrecy made people even more determined to find out who is this guy. Curious as well? According to some sources it’s a banker from Moscow and not one of the usual suspects like Roman Abramovich, or the vodka mogul Roustam Tariko.
So the list of 33 Russian billionaires narrowed down to 26. Andrei Melnichenko, of MDM-Bank denied purchasing the painting. Other sources would say that the accent of the guy acting on behalf of the buyer could have been Bulgarian or Romanian.

If you want to read in the clues as posted by the British Telegraph, here they are:
Clue One:
A Moscow Banker of information, from a source who claims to know the buyer personally, narrows down the list of 33 Russian billionaires to these men:
Boris Ivanishvili, Impexbank: worth $3.9 billion
Vagit Alekperov, Imperial Bank: $11 billion
Alexander Lebedev, National Reserve Bank: $3.5 billion
Nikolai Tsvetkov, Uralsib: $5.2 billion
Andrei Melnichenko, MDM-Bank: $2.7 billion
Clue Two: But Not Russian
The only way to square this clue with the first is to focus on those Moscow bankers who come from countries outside the Russian Federation:
German Khan, born in Ukraine
Vagit Alekperov, born in Azerbaijan
Boris Ivanishvili, born in Georgia
Clue Three: Elimination
Alekperov is more of an oilman than a banker, and Khan has art-aficionado friends who would have advised him on auction protocol.

That leaves (based on speculation and circumstantial evidence):
Boris Ivanishvili. He fits the profile, plus he sold his Moscow bank a week before the auction, giving him $550 million in extra spending money.

Artists like Picasso are big brand names, making their artwork like international currency so it’s understandable that it’s worth millions. But a calf or a shark in formaldehyde could it be called ‘art’?