I have just come across this info. It looks like Paula is really angry and hurt and considers not returning as a judge for the next Season 9 of American Idol.

Why is she hurt?
Because apparently she makes a little bit over $ 2 million per year for her appearance on the show, while Ryan Seacrest sealed a new deal for $15 million per year.
Ouch!
I like Paula, although I consider her too nice and polite to be an objective judge.
Why is Seacrest paid that much? Now that’s a good question. I found him obnoxious.
My guess is that if Simon Cowell and Paula Abdul are out of the AI picture, the show will lose the majority of the audience. I can’t imagine anybody tuning in to hear the stupidities that get out of Seacrest’s mouth, especially when attacking Simon with his ridiculous remarks. Other than that, what is he doing besides just sitting there?

Wait! It’s getting even worse!! I have read that Jennifer Lopez might be the next judge, replacing Kara I suppose.
What a nightmare.
Imagine the American Idol’s new format: Seacrest paid undeserved huge amount of money will become more boring and obnoxious, Randy will wait until 2011 when his contract expire and bail out, Simon and Paula replaced by Jennifer Lopez and… who knows what other boring ‘celebrity’.
Recipe for disaster. I am not going to watch if Simon is no longer with the show. He is, hands down, the most intelligent and down to Earth person the show will ever have.
I mean, if somebody is to ask for more money to stay with the show that would be Simon. Next on line I would say it’s Paula, because as loopy as she looks and talks sometimes, she is entertaining. Ryan Seacrest gets on my last nerve and Randy ‘the dawg’ it’s just Randy. His input is pretty much equal to zero.

Just a quick note before starting analyzing this piece of info: it’s about Roma population from the Czech Republic.

In case you don’t know who the Roma are, I tell you: they are Gypsies. Gypsies aka Roma don’t have a good reputation because generally speaking they are thieves and they do more bad then good. Just ask the Brits how happy they are with the ‘travelers’ getting more and more under their skin and being given preferential treatment just because they scream bloody murder if not.
So, I applaud Canada’s decision and I hope it will stand regardless the suggestion from a Paul St. Clair- executive director of the Roma Community Centre in Toronto (who the heck knew we had something like that here?) addressed to the Czech government to ask the European Union for retaliatory measures. Oh yeah??!! What for? Because a bunch of Roma are lying that they are persecuted? If they are, it’s because the way they behave, not because they are a different race.

Mexicans are another piece of art. Most of them are hard working guys, hands down to that. But… and there is a big BUT, how to screen the hard working ones from the drug and human smugglers? And let’s face the reality: Mexico is in a state of anarchy, with drug cartels running basically the country.

Coincidentally November it’s the month when a typical flu strikes. What’s new is just the newest flavor: swine flu
Why newest? Because by the time GlaxoSmithKline, which is under contract to provide the flu vaccine for Canada, may come with the shot, the virus would have probably mutated.
I have read rumors about mandatory vaccination in the U.K. but I don’t believe it would be the same in Canada.
Now, let’s presume for a second that a vaccine would be available. Is it going to be sufficient clinical data to assure us that the 1976 experience won’t be repeated? At that time, when the swine flu showed its ugly head, a vaccine was rushed into manufacturing and distribution to population without being properly verified. The result was a high rate of Guillain-Barre syndrome, which causes neurological disorder.

If indeed the global vaccination would become mandatory, GlaxoSmithKline (NYSE: GSK) will laugh all the way to the bank. Today shares of GSK were traded at $36.43. Your guess is as good as mine where it’s going to be in a few months from now.

Why is President Obama good sport

1. He threw out first pitch at 2009 All Star Game.
2. He is a normal human being as you can see in the picture 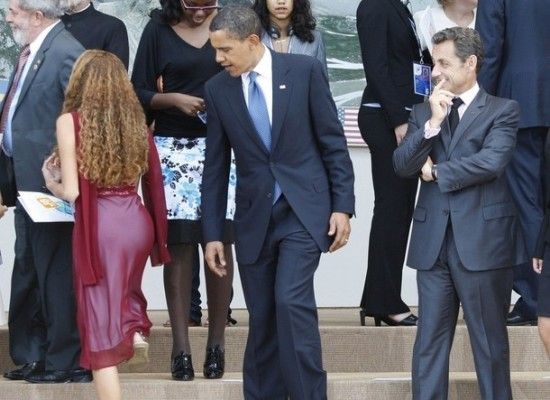 3. On responsibility for the economy he said ‘Give it to me’ He added “The hard truth is that some of the jobs that have been lost in the auto industry and elsewhere won’t be coming back. They are the casualties of a changing economy.”
Note to suckers who bought GM shares: that was a bad pick! At least for another 10 years or so.