It should not have come as a surprise considering how Austrian government left its people down (and yes, I am talking about that Iraqi ‘refugee’ who admited raping the 10-year old at the swimming pool; as we remember, he was not put in jail with the other inmates for the fear of being punished (read ‘killed’) by them; in my opinion his trumpeted ‘human rights’ meant diddly squat at that point)

Norbert Hofer won 36.4 per cent of the vote and it will face Alexander van der Bellen in the final vote for Austria presidency, next month. Hofer won his nomination running an anti-immigrant and anti-Europe campaign; in the opposing corner will be van der Bellen running on a environmental and pro-refugee platform.

Who can blame the Austrians for voting Hofer in? Not me for sure. Just think that Austria has a population of approximately 8.6 million and took in since last summer 100,000 refugees/immigrants. By comparison, the U.S.A with a population of over 321 million accepted to take in 10,000 Syrian refugees. According to Josh Earnest, the White Hose press secretary, those wishing to go to the USA must apply through the United Nations present in many refugee camps, meaning that they are to go to intense background and medical checks and they are to be screened by the National Counter Terrorism Center- From NY Times, September 11, 2015.

It’s interesting that people who care for their country are now called nazi/far-ring/rasist; maybe, just maybe they are decent people capable of critical thinking; maybe they do not want to become an islamic state and they might be fed up with the hordes of ingrateful people coming over and taking what they like and destroying what they don’t like. Maybe they are fed up accommodating the parasites they never asked for; maybe they are tired of the communist rhetoric coming Merkel, Hollande and other like them.

Trivia: Who was secretary of the Agitation and Propaganda society at Leipzig univesity?

The latest development of migrant crisis in Europe, dated April 16, 2016.

Sweden installs high tech military heat sensors on the bridge linking Sweden to Denmark. The bridge is designed for trains and cars, not for pedestrian traffic. Naturally that will not deter migrants from heading to the promised land of lax labour laws and good benefits.
Meanwhile the guys already there start showing their real face ‘In a secret report by Sweden’s National Criminal Investigation Service, migrant attacks on officers are detailed including police cars being stoned by masked groups’ – Express.co.uk
I guess these idiots are having second thoughts now: 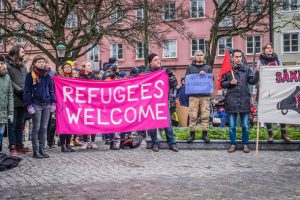 As a result of the huge influx of migrants, Norway re-introduced border controls.

Austria has built fences at four border crossing and the border checks are set to start in June at Brenner pass linking Austria to Italy.

Switzerland increased the military presence: 2000 soldiers in army tanks to patrol the border to Italy, fearing that due to Austria closing the border, migrants might try to find alternate routes.

It is mind boggling to me the lack of vision and understanding of European’s rulers. I don’t find it normal to impose your own citizens to wear certain cloths,go only on certain parts of their cities or behave in a certain manner not to ‘offend’ the migrants. The migrants should be grateful for having been offered shelter and food. They should integrate in the guest country, not make the said country bend to their own archaic rules.